Don’t go into the Basement!

“Don’t go in there“, I heard my little-self say.  It was a cold, dark basement at the bottom of some very rickety stairs. 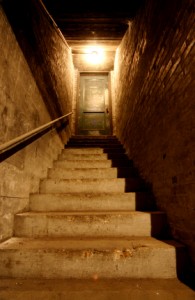 “You don’t know what’s down there this time“, my small inner voice was becoming louder and insistent.

I knew I needed to go down into that dreaded pit.  There were some things I needed to retrieve and pacing around upstairs with my fear building with each step wasn’t going to get it done.  BUT I did have some very valid concerns about basements…

There might be spiders (I don’t like them) and spider webs (when I walk into one I get really creeped out-ninja warrior style.  I’m afraid that the spider is now in my hair.  And if you’ve seen my hair you can understand why this concerns me.)

Then there’s the imprint from my Dad. A really bad imprint…

See, he had one sick sense of humor (that I enjoyed most of the time).  As a young teenager, we moved into a home where the basement was unfinished; it was dark, had spiders and very-creaky-open-wooden-steps.

Just walking up and down them sounded spooky. And these were the times when the slasher/Jason movies were so popular; so I would walk up the steps 2 at a time with a concern of what might be behind me in the dark.

I went downstairs to do a load of laundry and before I could walk back up, I had to turn off the basement light. (are you getting an idea of what’s coming next?) Then it happened.  Without my knowing it, my father had slipped down the stairs before me and was hiding underneath the open steps.

In the dark, me already jumping up the stairs 2 at a time because of what might be behind me, and he reached out, grabbed my ankle and growled like a demon from hell!

I screamed, he laughed and decades of challenges were born…

Yes, a fear of basements showed up, but that was the least of my worries…

A distrust of any one in authority began to solidify, but that still wasn’t my biggest problem…

I began to believe that the very people who were supposed to protect me would be the ones that would continue to frighten me to my core.

And here’s the kicker. Once the subconscious has accepted something as the truth (aka a belief) it will continue to seek out people, places and things that support that truth. Which means I was subconsciously seeking out the very things (and people) that would continue to frighten me.

And something known as the Shadow-Self begins to materialize.

What’s your Shadow? The part of you the holds unprocessed pain, disappointments and experiences you just couldn’t cope with. It also is the keeper of all the parts of you that weren’t accepted (either by others, or later in life by you).

Why even bother with anything in the Shadow? Because there is a tremendous amount of energy waiting to be unleashed when you go back in time and take your power back from what has held you back!

What’s in your Shadow that (when empowered) can actually catapult you into Success?

I’ve made a deal with my inner voices and their fear (using self-hypnosis); we really do need to go into the basement.  Go along with me, help me to stay vigilant to my surroundings and that will keep us safe.  But don’t keep saying how we shouldn’t be here/let’s get out now or I won’t listen to you when I do need your input.  You’re here to help me, not hinder our progress.

Doing this has worked well in the relationship with my itty-bitty-shitty-committee and eradicating false fears.

How about you?  Is there an area that you need to move into and your inner committee is doing its job a tad too well?  Instead of silencing it, can you ask them what they want you to know and how all of you can work together as a team instead of pulling apart?

By the way, I did make it into the basement and retrieved what I needed.  It wasn’t the basement to my house though, it was my subconscious mind.  The place where my fears and the parts of me I don’t like lurk about.  I wonder…when is the last time you visited yours?